let me just say how much i miss you all - and i'll be seeing you soon.

however, i just need to show you guys something i found disturbing... you know how Keith loves zombies??

i have no idea why... actually, scratch that - i think i figured out that my fear of zombies can be traced back to michael jackson...

as is becoming brutally obvious, i'm a bit older than you guys, and therefore 'thriller' was much more the rage when i was a child than the rest of you. and yeah, my first viewing of the video of the title track scarred me for life. there's the part.... with the zombie guy.... blood or black goo spewing out of his mouth....

and a phobia was born.

Well, fast-forward to this week - my most beloved band released the first single from their upcoming album, and the artwork for the single has just been released: 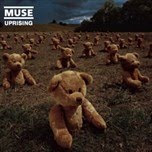 Great. I won't sleep for a week. Thanks Dom, Chris and Matt.

Hiding my stuffed animals and battling night terrors,
michelle
Posted by Helicopter Dance Off at 12:52 AM