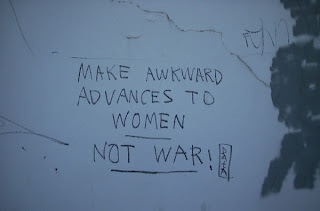 Let's review this statement. This graffiti is saying that it is better to "make awkward advances to women" instead of "war". After the exclamation point there is a rectangular block that says the word "DATA". Maybe I'm reading it incorrectly but in my mind I'm convinced it says that. So with that being said I am led to believe that this tag was put up on a public piece of property by Data from the Goonies, Jonathan Ke Quan. He is also known for his pivotal role as Short Round in Indiana Jones and the Temple Of Doom.

I think this sneaky bastard is taking his new gadget, spray paint, and defacing the world around us. He is trying to write witty, inspiring, thought provoking statements that I agree with!

Awkward is a way of life, just like the life of Short Round and Data. Now put that awkward towards women and you've got yourself a good time. It is a great way to test out what works and what doesn't work...in being awkward. There are no positive goals when it comes to this. The whole outlook is to be negative. Sit on that short round data!

As for the "not war" that is pretty clear. I will not have to discuss that.

The underlining of the few key phrases also highlight the words for the human eye because they are important. In case you didn't know, the exclamation point is showing that the last line has to have some power behind it so it is understood correctly.

My friends, please think about the next time you hit on a woman at a bar or family reunion and don't make war. Awkward war is a whole other story for another day....or next Thursday.

-Sean
Posted by Helicopter Dance Off at 5:32 AM