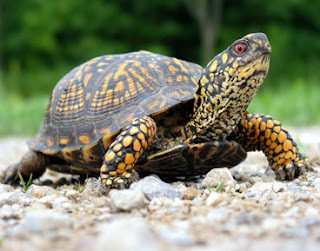 So this Thursday in NJ's very own Morris Township, a 17 year old girl saved a poor defenseless turtle from the middle of the road while driving home. With the intention to have a new pet, the girl decided to take the turtle into the car with her. What she didn't know was that her new passenger was actually A MOTORIST'S WORST NIGHTMARE!!!!

The turtle, obviously a skilled hitchhiker and wanted assailant, proceeded to crawl up the teen driver's leg. This frightened the girl for fear that the turtle was looking for more than just a free ride, causing her to lose control of her vehicle and crash into a tree!

According to Detective O'Shea, the victim luckily suffered only minor injuries while the turtle walked away completely unharmed. The girl faces a summons for careless driving....but the turtle is still in custody for attempted molestation charges.

This story will also be aired next week on the new television drama "To Catch a Reptile".
Posted by Helicopter Dance Off at 12:08 PM