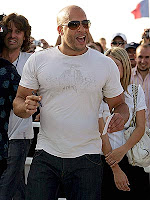 I was one of many who had the distinct privilege of watching this backyard slugfest. When Diesel entered my neighbor Will Humphries’ back yard the crowd went absolutely bananas. Weasel also managed to make a memorable entrance by catching a wild rabbit and eating it.

The fight was way closer than most anticipated. Diesel’s gut punches, which he calls The Fist and The Furious, stunned Weasel in the opening minutes. Weasel was able to regain some ground by steeling eggs from a near by chicken coupe and blaming it on Diesel. Diesel then went in for some head punches, a.k.a. Fist and Furious, but Weasel dodged them because he had already seen The Fist and The Furious and refused to be suckered a second time. Angry at Weasel’s defense, Diesel picked up Weasel, strapped him to a chair, and made him watch the Pitch Black Trilogy five consecutive times. Weasel is dead.

Posted by Helicopter Dance Off at 6:05 PM