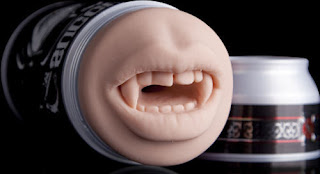 There are two things in this world that absolutely mystify me; fake vaginas and the Twilight book series. They are both shitty versions of something awesome so why wouldn't you just spend a little extra time and money to get the real thing in both instances.
7) Fake vaginas just sad.
I have a lot of sad friends that live with their parents, play MMORPGs, collect action figures, have extensive porn collections and sleep in capes but none of them own a fake vagina.
6) The vampires in the Twilight series are not vampires
Count Chocula is more of a vampire then Edward Cullen.
5) Why don't we combine a successful teenage novel with an adult sexual novelty.
Are we just going to invite pedophiles over for dinner now?
4)Pain
The TEETH!
3)Vampires like blood
They are looking to drink from there, it would be like water fountain fake vagina for humans.
2) The vampires in the Twilight book are men.
Sorry Ryan.
1) The vampires in the Twilight books are high school men.
Nobody seems to understand how wrong these things are...
Posted by Helicopter Dance Off at 6:34 PM