HDO is featured in the current triCity News paper based out of Asbury Park, NJ. Here is the scanned equivalent of the article for your eyes on here. Below, is the typed out content of the article, so you don't have to squint so much to read it. Thank you to Steven at triCity and to our good friend Simon Yuen for his photography skills. 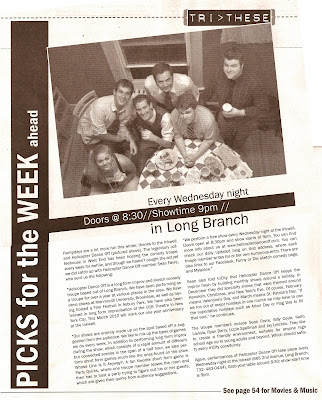 PICKS for the WEEK ahead
Tri>These

Humpdays are a lot more fun this winter, thanks to the Inkwell and Helicopter Dance Off (pictured above). The legendary coffeehouse in West End has been hosting the comedy troupe every week for awhile, and though we haven't caught the act yet we did catch up with Helicopter Dance member Sean Favre, who sent us the following:

"Helicopter Dance Off is a long-form improv and sketch comedy troupe based out of Long Branch. We have been performing as a troupe for over a year at various places in the area. We have done shows at Monmouth University, Brookdale, and having hosted a Film Festival in Asbury Park. We have also been trained in long form improvisation at the UCB Theatre in New York City. This March 2010 will mark our one year anniversary at the Inkwell.

"Our shows are entirely made up on the spot based off a suggestion from the audience. We like to mix up the types of games we do every week. In addition to performing long form improv during the show, which consists of a rapid amount of different but connected scenes in the span of a half hour, we also perform short form games much like the ones found on the show Whose Line Is It Anyway?. A fan favorite short form game is Party Quirks, where one troupe member leaves the room and then has to host a party trying to figure out his or her guests, which are given their quirks from audience suggestions.

"We perform a free show every Wednesday night at the Inkwell. Door open at 8:30pm and show starts at 9pm. You can find more info about us at www.helicopterdanceoff.com. You can check our daily updated blog on that address, where each troupe member writes his or her own humorous entry. There are also links to our Facebook, Funny or Die sketch comedy page, and Myspace."

Sean also told triCity that Helicopter Dance Off keeps the improv fresh by building monthly shows around a holiday. In December they did specialty shows that were themed around Hanukah, Christmas, and New Year's Eve. Of course, February means Valentine's Day, and March means St. Patrick's Day. "If we run out of major holidays in one month we may have to use the superlative holidays such as Arbor Day or Flag Day to fill that void, " he continues.

The troupe members include Sean Favre, Billy Coyle, Keith Laviola, Ryan Barry, Lizzie Spellman, and Jay Letchko. They like to create a friendly environment, suitable for anyone high school age up to young adults and beyond. Which should satisfy every triCity consituincy.